While I've gotten some wreck-worthy cakes for my kids parties before, I'm having a good track record on the ones I make myself. See below: 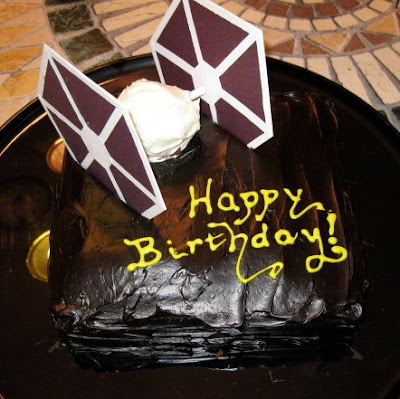 When my son decided he wanted a Star Wars Party, I thought of these TIE fighter cupcakes I had seen online. Only, I didn't want to make 10 or 20 of those! That's just a whole lot of work, even for something so cool. So, I decided I'd just add one to a regular cake. Came out pretty cool...I have to admit! The birthday boy was happy with it even though he really wanted a Yoda Cake (Which would have been wreck-worthy for sure, at least if I had made it! That's just a little beyond my cake-making skills.)


It was a fun party. The kids got to "use the force" to navigate an obstacle coarse blindfolded, make robot droids out of misc. stuff we painted gold and silver, and defeat a Death Star Pinata (which was really a Disco Ball Pinata, but honestly I thought it looked more like a Death Star than it did a Disco Ball). For party favors we gave out printed paper masks which we found on the Star Wars Site and light saber bubble wands (which Wal-mart was selling for a dollar each for Easter). We didn't dress up during the whole party as originally planned. The guests had started to arrive before I could dress the kids, and the one family that brought costumes didn't come wearing them--but brought them with them--so we just dressed up after most of the party was done, which worked out better since it was a warm day and some of the costumes would have made the kids sweaty. 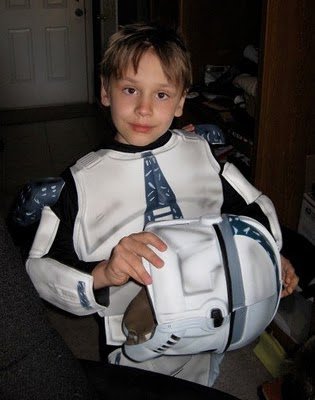 
Shared on Throwback Thursday
Posted by Gale at Thursday, March 18, 2010