Since becoming a parent I've been much less of a "Literary Junkie" than I used to be, but since I recently have had the opportunity to read something, I thought I'd join in and answer the questions at the Literary Junkies link-up.

1. What are you reading right now?
I just finished The Hunger Games.  I keep going back and re-reading parts of it so it totally counts as something I'm "reading now."   Wow.  What a powerful, gut-wrenching, book. Do not pass this off as just "youth fiction."   Though, my 10 year old did love it.  (10 is a little young, though he's mature for his age.  I had bought the book for me, and not intended to pass it on to him until later because of the subject matter, but then I wake up one morning and find him sitting on the couch a third of way through it.  You can not let your child read a book, but not letting him FINISH a book is another matter.  I know how crazy that would drive him.  So I decided to catch up and read it myself so I could talk about it with him.  It does have a lot of violence, but the IMPLICATIONS of that violence is right on target.  It really challenges the cavalier treatment we often have towards it.

2. Out of the 16 books that will be turned into a movie adaptation, which one are you most looking forward to seeing this year? (Article Link)
I have not read any of these books, but the Maze Runner, The Giver, and The Hundred Foot Journey all sound like books I'd love to read and films I'd love to see.

3. What was the worst book you’ve ever read?
Last of the Mohicans...really, watch the movie, it's better.  And I don't say that often.  Think I'm just uncultured? Well, Mark Twain Hated it too.

4. What foods or beverages have you spilled on a book while reading? Anything good?
Ha ha.  I can't remember, but I'm sure I've spilled a few.  Actually, probably breast milk, cause I attempted to read while nursing.

5. Do you picture characters as popular film or tv actors? Or do you create a whole new person in your head?
My imagination creates their own characters.

6. Out of all the authors you’ve read books by, who’s brain would you want to pick the most?
Definately one of the Biblical writers.  Though there's also quite a few poets I'd like to ask questions of.  And right now, having just read the Hunger Games, I'd love to ask Suzanne Collins whether her book was at all inspired by the Roman idea of "bread and circuses."

The following giveaways have California and/or Texas appeal:


Oh, and I found a blog with a whole section just for California Giveaways Here.  Cool huh?

Posted by Gale at Wednesday, January 22, 2014 No comments: Links to this post

This is Wherever Wednesday (14) 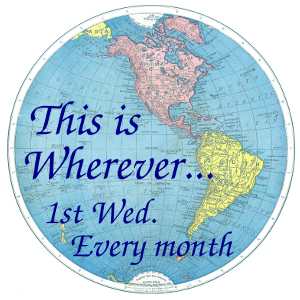 Hello all!  Sorry this Wherever Wednesday is a week late  I was out of town for the holidays so had to postpone it.  So, how was your holidays?  Were there any "this is my town" moments, moment that made you think, "Only here!"  Please share them! 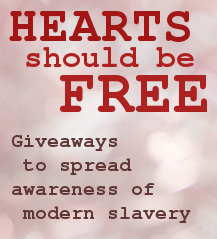 I'd like to take a little side trip and ask you to all check out a great event called Hearts Should Be Free going on Jan 15 - Feb 15 to raise awareness about a problem many do not know still exisits.  Sadly, slavery is still alive today and it's a world-wide problem.  Though slavery is illegal in every country, there is no country where the forced exploitation of people for labor  and/or prostitution does not exist.  Bloggers are still needed to help promote and participate in this event.  Please check this event out and see what you can do.


Now, as always, here are few of the highlights from last month.

Thanks to everyone else who posted last week.    Some of the posts has errors (linked back to here or just to the main blog, not a specific post...so you may want to check if last month's went through and repost if it didn't (you're welcomed to post more than once a month here...any time).

To everyone else, please leave your "This is Wherever" posts on the linky below (whether your wherever is "New Hampshire, Panama, or the Pacific Northwest").    If you're still a little uncertain what that means, this post over at Budget Blond will help you out.  And, though it's not required, I'd love if you would grab the This is Wherever button on the sidebar and share it in your post or somewhere else on your blog!  And make sure to visit some of the other links too!  It's always a fascinating journey.  Thanks for participating!

Below are 3 Giveaway Link Ups:  Giveaways 4 Good, Low Entry Giveaway, and a Regular Link-up For Everything Else, collected here, for your easy browsing.  If you want to submit a giveaway, or see theses linkies separately, please do so at the appropriate links below (as rules for submitting are not on this page).

SUBMIT A GIVEAWAY FOR GOOD

SUBMIT ANY OTHER GIVEAWAY

Low Entry Giveaways
Giveaways with under 150 entries ending within a week.  Please include end date, and number of entried when posted.


An InLinkz Link-up
Posted by Gale at Saturday, January 04, 2014 No comments: Links to this post

Wherever Postponed Til Tuesday

Due to New Years, and my busy schedule, This is Wherever Wednesday will be on NEXT Wednesday, Jan 8.
Posted by Gale at Wednesday, January 01, 2014 No comments: Links to this post