As some of you who follow my blog know, this last year I did a little experiment with my backyard. After finding out I had some Mexican Evening Primrose growing wild there, I decided to hold off on mowing until I found out what else was in my yard. It was exciting!  Through May, June and July I discovered all sorts of pretty wildflowers.  Then in September, when it seemed like all the wildflowers were done for and my yard was a tangle of not so pretty weeds, I went ahead mowed one side, leaving only some tall tufted grass that I liked. Then, the very next day the un-mowed side burst into pink flowers! 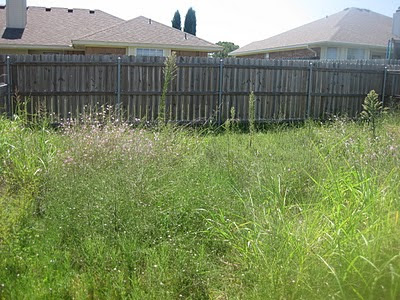 That doesn't show the pink flowers very well...but it does show how overgrown it had gotten.  That was in September.

Well, about two weeks ago I mowed and now it looks like this... 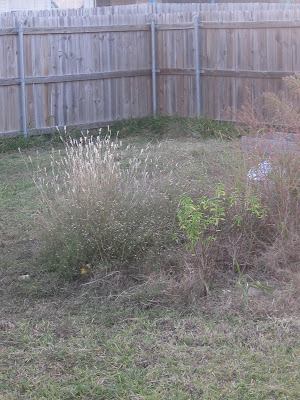 I left a clump of that tufted grass I like, along with my basil (from my overrun garden that was in the center of that jungle) and a few adjacent wild plants that I thought made a pretty little gathering together.  The pink flowers had stopped blooming, but the plant they had been on is there in that clump too, so I know I'll get it next year.  I was really quite happy about how it turned out!

Thanksgiving is coming up, so how about some good Ole' Texas Turkey!

Hmmm...not exactly type of Texas Turkey you were thinking of?

Ok, what about this?

The Texas Outfitters "Rio GrandeTurkey" by thetexasoutfitters
See other t-shirts designed online at zazzle
There, that's Texas Turkey!
Happy Thanksgiving!
Posted by Gale at Saturday, November 20, 2010 No comments: Links to this post

Found Some Giveaways Especially for Texans and Californians!
California

For this week's Souvenir Saturday how about some fall color!

Texas thanksgiving wishes foliage border by studioportosabbia
Learn how to sell my artwork on zazzle.

Posted by Gale at Saturday, November 13, 2010 No comments: Links to this post

Welcome to this week’s edition of Aloha Friday! Every Friday (well, ok, almost every Friday) I ask a simple question--nothing that requires a lengthy response.

This week I've been having some fun tracking down songs related to Texas and California. I'm putting together a list here. So my question for you today is...


Do you know of any California or Texas songs? What's your fave (or a few of your faves)?

Please leave your answer in a comment below.  And, if you have a blog and would like to post your own question you can leave your link at An Island Life.
Posted by Gale at Friday, November 12, 2010 6 comments: Links to this post

These buttons baffle me...

HUH?  I Texas TX?  I don't even understand what that means.

OK, I've heard of Ya'll and Fix'n but never We'e.   Sounds like something someone might say on a roller coaster at 6 flags...or maybe something you pull over to do after driving miles and miles through the miles and miles.

Though, I will say the "Miles and miles of miles" is hilarious (and absolutely true--as anyone knows who has ever driven from Dallas to California.  It really sinks in when you get to to El Paso and realize you're only half way there.)


If you'ld like to see some less baffling Texas (and California) buttons I featured recently...click here.
Posted by Gale at Wednesday, November 10, 2010 2 comments: Links to this post


Read the Lyrics/Get the Chords Here

And find more country music at the Country version of ...

I decided to post my weekly Texas and California blogging finds (and the occassional Texifornian one).  This is actually for the past two weeks, since I didn't get it up earlier.  Oops.  Anyways, found some wonderful posts and photography.

TEXIFORNIA
I met a new Texifornian this week.   (She says shes doesn't really count the Texan part...but generally refers to herself as an exile.  I can relate to that.)  She has FOUR blogs--all of them excellent, but the one I thought had the most "Texifornian" appeal was her blog Owl's Farm:  "the Farm consists a series of musings, mostly about place: topophilia, utopia, dystopia, geography, landscape, and home."


TEXAS
A little rain yesterday and the puddles were mirrors is a beautiful poetic description of fall in Texas, and then followed that by another beautiful description of East Texas: somerset life: in which i tell the the world about east texas.


CALIFORNIA
There were OH SO MANY Californian Sky Watch Pictures to love these last two weeks.   Here are my favorites in no particular order.

Posted by Gale at Monday, November 08, 2010 No comments: Links to this post 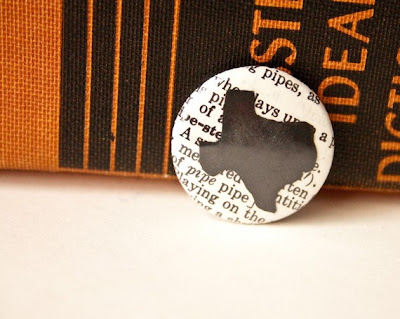 Yes, yes...I haven't done a Souvenir Saturday in forever. Thought I'd share some fun Texas and California flair I found on Etsy and Zazzle. I found the button above at Pumpkin Bear. It's her homage to Texas, where she went to college and says she got into mucho mischief.

I found the button's below at Parsnip and Pear. They have nifty map buttons for various California and Texas cites.

And here's some of my favorites from Zazzle....

I really liked this Texas button.  It's actually a Vintage drawing SMOOSHED,
which I would have never known if I hadn't explored TheVintageVamp and found
the original.  I think the resized button above came out with a fun
cartoonish look, in stead of looking distorted.

And now for some California buttons...

And here's one I could wear to brag on my
Calfiornia upbringing.
Do you have a California or Texas product you'ld like to see featured here? Leave a comment with a link below and I'll consider it for a future Souvenir Saturday.
Posted by Gale at Saturday, November 06, 2010 1 comment: Links to this post 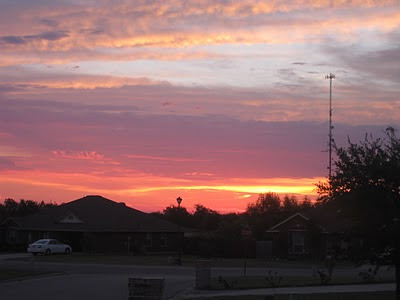 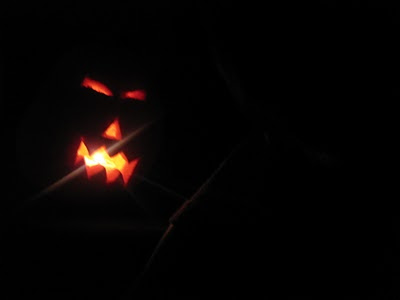 My kids had fun carving the jack-o-lantern above.  It came out pretty scary looking.  But even scarier than that is what happens after halloween...EVERY year.

Well, at least to us.  Everyone else in the world might not get sick the week after halloween, but I can't remember a Halloween we haven't gotten sick.  Even on my second son's first halloween, three days after he was born, his older brother got chicken pox!  This year one child is coughing, and the other seems fine except that he threw up last night....and that wasn't from eating too much Halloween Candy, cause I've only let them eat a few every day.

So, here's my questions for Aloha Friday and 2 Question Thursday:
If you have a blog and would like to post your own questions you can leave your link on the appropriate day at the linkys at 2 Questions Thursday and An Island Life
Posted by Gale at Thursday, November 04, 2010 12 comments: Links to this post

My husband and I try to research and vote in as many of races for "minor" state and local offices as we can--offices like State Board of Education, Comptroller, and Railroad Commissioner (an office which in Texas has nothing to do with railroads and lots to do with regulating the oil industry).  We know these offices can affect our lives as much as the "more important" positions like Governor and Senator, and we know that less people vote on them, so we figure our votes count even more on these than on the "big" races.

What's frustrating to me this election is realizing how many of these "minor"  offices are decided by people who vote straight party line, when most of those offices don't even have anything to do with what a lot of those people voted straight party line about.  For instance, I'm Pro-Life, so that means I often vote republican.  But when it comes to things like Agricultural Commissioner or Railroad Commissioner their duties don't include anything that would affect that issue.

My husband and I are watching several of these "minor" races and noticing that in our state the Republican candidates are winning by almost exactly the same margin on these lesser known positions (and that's not true for the more well known offices like Governor and Senator).  It makes me wonder if most of the democrats in these positions are loosing solely because of party line votes from people who, in general, don't even know what the office does or what the candidates stand for (a lot of them at least).  Most of the people who don't vote party line just don't vote on these.

It saddens me to think that because of party line voting some qualified and capable candidates who are running for the right reasons might loose to candidates who are corrupt, inexperienced, misguided, or who are just seeking this position as a stepping stone to another "more important" one.


So, my challenge to you for the NEXT election is this:
Read more about the affects of Straight-Ticket Voting:
In November, Straight Ticket Votes Decide Winner (Texas)

Posted by Gale at Wednesday, November 03, 2010 5 comments: Links to this post

I am! And boy do I wish I hadn't waited this long. Election day sort of slipped up on me. I thought I had a couple more weeks to go and, YIKES, election day is tomorrow.

As I find useful articles and sources, I'll be posting them here, mostly be focusing on Texas (since that's where I'm voting).

Candidate Research
Here are some sites that check candidates statements to see if they're true.  It's important to at least skim the explanations of why they think something said was true or false, though.  For instance, they marked Chet Edward's statement Edwards makes a case that he’s steadfastly opposed efforts to impose gun controls. However, none of his cited measures would "take away" anyone’s weapons. It’s overblown claims like this that keep the Truth-O-Meter in business.

Project Vote Smart
On the Issues

Free Voters Guide
NOTE:  This resource can be helpful for positions like Governor and State Board of Education, though realize it asks some candidates questions that have nothing to do with their jobs. For example, The Railroad Commissioner, and Commissioner of Texas Land Use of Texas and Agricultural Commissioner's jobs have NOTHING to do with most of the questions they were asked. They have no say over abortion, Divorce Reform, etc. And its too bad that they weren't asked any questions about the environment or economy because they do have a lot to do with that.

Check Truthfulness of Candidates Statements
These sites check whether statements made by politicians are true or false.  Be careful to at least skim the explanation why, because it can reveal important details that shed light on the candidate.  For instance, Chet Edwards was marked "false" on his claim to "say no to Washington liberals who want to steal our guns" not because he didn't actively oppose gun legislation (he did) but because they thought that legislation didn't actually threaten to "take away" guns.

Politifact - Texas
Politifact National
(has some articles on California but not a whole section)
Fact Check.org

Articles and Info on Specific Candidates and Races

ARTICLES:
Did Jeff Weems Lawyer for BP and Enron, and Big Oil?
Summary:   Yes, but it was mainly litigating royalty disputes..


TEXAS LAND COMMISSIONER
If you care about conservation, preservation, land use, energy, and surprizingly, Veterans (yeah...it's someone related in there), this is a position you should research.


Please share any articles on any Texas or California election subject you found helpful.  Thanks!
Posted by Gale at Monday, November 01, 2010 No comments: Links to this post