I've been meaning to post here about an issue that burden's my heart...SLAVERY. You may not know (I didn't until a few years ago) that though slavery is now illegal all over the world, there are more people enslaved now than there were before the Civil War. I'm not talking about people who work for poor wages...I mean actual slavery, where people are forced to into labor or prostitution by threat of violence and are not allowed to leave. And it happens everywhere, even in the United States.

I will be writing more about how this affects Texas and California soon, but for now I wanted to share about some 1 week Abolutionist traning opportunities in San Francisco coming up.

Welcome to this week’s edition of Aloha Friday. Every Friday (well, ok, almost every Friday) I ask a simple question for you to answer--nothing that requires a lengthy response.

The kids just have a few days of school left, and the week after school gets out, I'm helping out with Vacation Bible School at our church...which is why I haven't posted since LAST Aloha Friday...I'm BUSY!

But busy with good things! I'm really excited about VBS this year. This is the second year well be doing a Holy Land themed VBS, where we recreate a place in the Bible (as much as humanly possible on a church budget) and let the kids touch, taste, and feel what it was like. Last year we did Egypt and I worked in our "marketplace" teaching the kids how to make mud bricks. This year we're doing Nazareth, and I'll be a "farmer" planting seeds with the kids. Even found some plants to sow similar to what actually grew in Nazareth. I'm really excited about it.

So, here's my question:


Does your church (if you attend a church) do VBS or some other summer camp activity for kids? If so, what are they doing this year, and will you be helping out?

You can leave your answer in a comment below.

Oh, and if you are doing VBS and happen to need 50 sunflower kits with terra cotta pots, there's a giveaway going on over here for them that ends May 27th.  Might be worth trying for...there's not that many people entered so far.
Posted by Gale at Friday, May 27, 2011 8 comments: Links to this post

Aloha Friday: Have you put your winter clothes away?

Welcome to this week’s edition of Aloha Friday. Every Friday (well, ok, almost every Friday) I ask a simple question for you to answer--nothing that requires a lengthy response.

I just read a wonderful blog post titled "Laundry Problems Start With Clothes." The basic gist of it was that most of us have more clothes in our closets than we need (or at least than we need in any particular season)...and that this hampers (pun intended) our attempts to get the laundry under control.

Now, in Texas (and California too), we can't really put the summer clothes away come winter time...cause even in dead winter there may be need to wear shorts. But we can safely store away our winter clothes during summer (cause here there is NEVER need for a thick coat, turtleneck, or sweater in summer...well, except maybe in the chilly overly-air-conditioned buildings).

So, my question for this week's Aloha Friday is this:

I'm still in process. Part of the problem is that I tend to let the clothes I don't really need at the moment sit in the bottom of the hamper while I focus on washing the clothes I need right now. This means that a lot of the clothes I should be putting away are still needing cleaning (yes, this does speak to the sad state of my laundry situation). This week, I'm making a concerted effort to get down the the bottom of those hampers so I can finally put those clothes AWAY!
Posted by Gale at Friday, May 20, 2011 8 comments: Links to this post 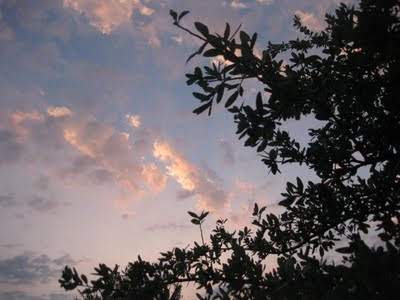 Sky Watch Friday
Posted by Gale at Thursday, May 19, 2011 6 comments: Links to this post

Found a giveaway for a $42 credit to the etsy shop Tag it Your It ...only 26 people entered so far, and the giveaway ends May 24! She may be from North Carolina, but she has this in her shop: 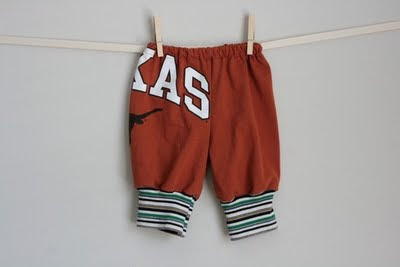 Not a Longhorns fan myself (Go Baylor Bears! Oh, who am I kidding...I'm not that into sports). But I figured some of you here might be interested.
Posted by Gale at Thursday, May 19, 2011 No comments: Links to this post

Thank you to whoever bought this bumper sticker from my Zazzle shop...

TEXIFORNIAN BUMPER STICKER by Texifornia
Create bumper stickers on zazzle.com
I hadn't even announced the shop yet because I wanted to get some more Texifornia designs...and just hadn't have the time. And I happened to check my stats and guess what...someone had bought that bumper sticker back in December! (Plus two people bought Texas Shamrocks in March.) That was just a really nice surprise!
Posted by Gale at Monday, May 16, 2011 No comments: Links to this post

Rabbits and Cats and Kiddos 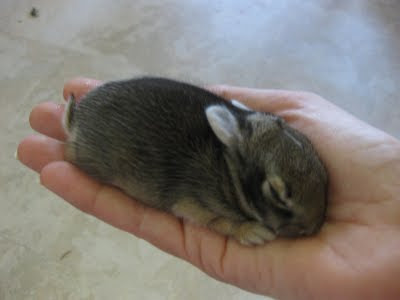 Guess what we found on our front porch today? It's not our first encounter with baby bunnies here. My son found a rabbit nest last summer, and unfortunately a few months ago we found some dead baby rabbits on our porch  (we think the mom was run over by a car in front of our house).

Well, lately we've had another visitor...a cat, probably a neighbour's, which my kids have enjoyed playing with. Well, this morning he was curled up on our porch, and when I took my three year old outside to pet her we found the bunny above in a little nook by the wall right behind where she had been laying.  When we noticed the rabbit the cat came over with some urgency and sniffed it...and then later came over and licked it's back, but didn't bite it. Made me wonder if this was one of those strange cases where a cat takes another creature under it's wing, or if the cat was just letting us know this was HER dinner.

Cat and child went to the other side of the yard and I slipped inside for a minute, and came back to find my child holding the bunny. I took it away from him, and not sure of the cat's intentions, took it inside until I could figure out what to do with it.

After a little research I learned the best thing was to try to return it to it's nest, but the cat was still hanging about (with no way to keep it out) and the nest, which I discovered at the edge of the porch, was very wet from last nights rain (I'm guessing that's why the bunny left it in the first place). So, I decided to keep him inside in a box with a warmed up sock full of rice (as suggested on the internet) and return him after it warmed up a bit and the cat had left.

He's now back in the nest...he snuggled into it immediately like he knew it, and seems to be fine. I am still concerned about the cat and a line of ants near the nest, but for now I think he's better off there. Since rabbits only feed their babies at night and early morning I'll have to wait until tomorrow to see if she's come back for him. They don't stay near their nest, I gather, because they don't want to draw predators to it.

I may not have handled things just right, but I'm glad to have found a live bunny this time and hope he stays that way.

UPDATE
Sadly, the little bunny did not make it through the night.  I found it the next morning just outside it's nest, and it had died.   Could have been the cat that the cat had done some danage to it we hadn't seen.  :-(


ALOHA FRIDAY QUESTION
Please leave your answer in a comment.  And, if you like stop by Aloha Friday to post your own question or see the other blogs participating.  For more animal pictures and stories, click the button below:

Vote on a Charity and Win Fun Prizes!

I don't usually care for Cadillacs (just not my type of car, even if I could afford one)...but I'm rather enamored of the DFW Caddilac Dealers right now as they are doing something to support some local charities right now.  Visit the DFW Cadillac Cares challenge to vote for the charity you would like to receive $50,000 (all of them will be getting $1,000).

How did I find out about this?  Devotional Mama, an blogger from Arlington, TX, is organizing a multi-prize giveaway to help spread the word.  It ends May 9.  Stop on over and check it out!
Posted by Gale at Thursday, May 05, 2011 No comments: Links to this post

I've been stumbling on some great posts and articles for the past few months, and wanted to share them with you!

Posts to make you laugh...

This month I stumbled on the Texas Cockroach (um...not a real one, thankfully...this is witty Onion style site for Texas!)  Check out this "news" article about a Lewisville ISD Teacher.  I used to sub in LISD, so I'm wondering if I ever met him.  :-)

Cake Wrecks (one of my favorite blogs) has a hilarious post about a Cake Show in Austin with some pictures of some amazing cakes, too.  These were Sunday Sweets...not wrecks (usually this blog makes fun of really bad cakes, but not on Sunday) .  The author's experience in Austin, however... more on the wrecky side.


Posts for your mind and spirit...

A friend of mine wrote a wonderful  guest post about community on Texas Schmexas.
And here's a great post I forgot to share with you all from a while back.  What Gives You Hope, by Texas Tanya.

California places  (and some gorgeous pictures too)...

There was  beautiful brief overview of Monteray Bay with pictures over at Petite Hermine.

Live, Love, Give had photos of Anza Borrego Desert Park, only 3 hours drive from Los Angelos...GORGEOUS!  Based on these photos I think Springtime would be the time to visit!

At Better than Ezra there was a neat post about the Chatsworth Nature Preserve in Chatsworth, CA.
And Postmark California Toyota posted about the Grand Prix in Long Beach, which just happened to be across the street from the marina I used to live in.  That was a trip down memory lane.  I remember hating the noise from it, but also having fun playing on the bleachers and bridges they set up for it before it came.

If you live near an HEB, you might get some use out of the HEB deals Frugally Thrify lists every week.

And a Little Something for Texifornians and Gardeners...
Owl Farm, one of my favorite blogs by Texifornians, had a wonderful Earth Day post about gardening, helping the environment, and coming to peace with where she lived now and the longing she still feels for the California Desert.