This is Texas State Pride

If you were blindfolded and flown from another state to Texas, it wouldn't take you long to realize where you were. There are reminders everywhere. 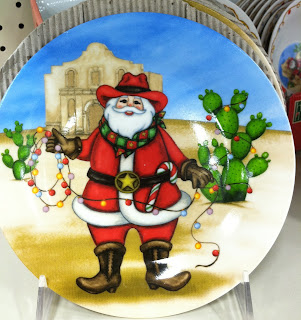 Yep, that's Santa in a cowboy hat holding Christmas lights like a
lasso in front of the Alamo.  Where did I find this?  Some cutesy little souvenir shop next to a state monument?  NOPE!  I found this at the grocery store. 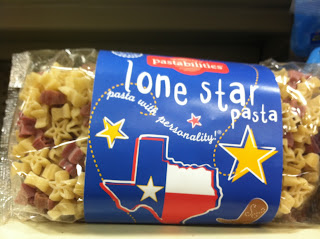 Oh yeah, there's LOTS of state pride to be found at the
grocery store!  Check out this "Lone Star Pasta" with little
macaronis in the shape of Texas, boots and stars.

Browsing down the aisles of my local HEB I also
found chips and crakers in the shape of Texas.  Didn't get
a picture of that, but Texas Type A Mom got one of the chips...
and a lot of other Texas Pride she found around town.  Actually,
it took her TWO POSTS to share all the stuff she found. 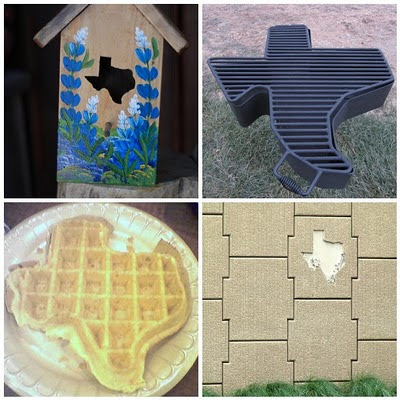 Never saw anyone put a California State flag outside their house.  When I lived three I'd occassionally I'd see something with California Poppies on it, and sure, you'ld see surfer and palm tree stuff.  But I've never been to a state where I've seen AS MUCH state pride as I've seen here.

What about you?  What symbols of "State Pride"  have you seen lately?  (Or City Pride, regional pride, etc.)  You can just let me know in a comment, but if you want to do a whole post on it, I'll share a link (and pics if its ok to share) on this blog next week. PLUS, it would make a great post to share over at Whatever Wednessday.